Why is it that people love Han Solo, the charming smuggler from the Star Wars franchise, but bristle at the mention of smugglers on the U.S.–Mexican border or in the Mediterranean? You might say movies aren’t real, and that’s a fair point. We know the negative consequences of real-life smugglers. We hear how they flout the law, take advantage of desperate people with little money, and put their clients in sometimes dangerous and compromising situations. While these scenarios sometimes happen in real life, they also occur with the fictional Han. To some extent, audiences sympathize with Han because they know him. We know his personality, motives, and background. We are made to understand that in the Star Wars universe, laws are restrictive and unfair, and, as a result, marginal economies thrive. In other words, it is not only what the smugglers do but also our knowledge of them and their lifeworlds that shapes our assessment of their actions.

While researching East European Jewish smugglers in interwar Europe, I thought a lot about the smugglers’ backgrounds and whether knowing this information changed people’s perceptions of the smugglers. Popular narratives had long associated East European Jews, or Ostjuden, particularly those from the province of Galicia, with illicit trade and movement in the imperial borderlands (though historians have found evidence of many non-Jewish smuggling networks, too). Concern over international crime grew after World War I, as nation-state boundaries solidified and transportation methods accelerated. Popular press and political rhetoric of the time painted a negative picture of the people who smuggled foodstuffs, alcohol, and even humans across borders. In these narratives, the perpetrators appeared as calculating criminals, sometimes part of a larger syndicate, who used their international connections to undermine the rule of law and decent society. This stereotype also followed East European Jews as they migrated into Western countries.1

One writer in particular, Joseph Roth (1894–1939), challenged the negative, one-dimensional image of East European Jewish smugglers in 1920s and 1930s Europe. The famed novelist and journalist was himself Jewish and hailed from Galicia (split between modern-day Poland and Ukraine), where a number of World War I refugees, and later smugglers, had originated. He delved into their backgrounds and motives, and explained the socio-political-economic context that encouraged people to take up illicit activity in the first place. In his 1927 book Juden auf Wanderschaft (later translated as The Wandering Jews ), Roth argued that, despite the ubiquitous myth that Jews had money, the East European Jew had “as little money as his anti-Semitic enemies.”2 But the East European Jew had to scrape together a living with fewer available avenues due to institutionalized anti-Semitism. Long-standing laws and traditions had excluded Jews from land ownership and certain occupations, and anti-Jewish boycotts threatened their businesses. War and violence in the borderlands of Germany, Austria-Hungary, and Russia, where many Ostjuden  lived, also disrupted their ability to work. When a number of Jewish refugees from the Galician front arrived in Vienna at the beginning of World War I, they received state assistance but only if they waited in line for hours, regardless of the weather, their age, or their health. Austrian locals, after an initial welcoming period, began to consider the refugees a burden on the state and society. For Roth, Jewish refugees “took to smuggling” due to frustration, lack of legal work, and low social capital among the locals. (Arguably, the smugglers then built networks where they already had social capital, among other refugees).3 Roth also pushed against the idea that the smugglers took scarce resources from law-obeying citizens. Instead, he argued that smugglers “made life easier for the Viennese” during the war by bringing difficult-to-obtain foodstuffs into Austria.4

Roth also sought to add complexity to the narratives surrounding illegal migration and the people-smuggling industry of interwar Europe. The business included recruiting people to migrate, guiding or transporting them across borders and around checkpoints, and procuring false documents. A push factor for emigration during this time, particularly from the former imperial borderlands, was the continuing violence of independence movements, the Russian Civil War, and pogroms. Unstable and poor economies also encouraged people to look westward. Many East Europeans sought to travel to the United States, which had been a major destination before World War I. Many also sought out closer destinations such as France and Germany, or they became suspended in transit there. Berlin, the capital of Germany, was major destination and transit point of people smuggling from Eastern Europe.5 Roth describe reasons behind the business of illegal documents in Berlin:

The struggle for papers, the struggle against papers, is something an Eastern Jew gets free of only if he uses criminal methods to take on society. The Eastern Jewish criminal was generally a criminal in his past life. He gets to Germany on false papers, or with none at all. He doesn't register with the police.6

The difficulties of procuring documentation for transit and entry derived partly from the loss of record offices during the war and pogroms, not to mention new definitions of citizenship as well as new requirements for proving it.7 The newly formed nation-state governments of Poland, Hungary, and Czechoslovakia also hesitated to allow young men of draft age to leave. U.S. immigration caps also meant a limited number of entrance visas for migrants from each country. Thus, some migrants sought people smugglers to facilitate part or all of their illicit journey.

Roth’s nuanced take on East European Jewish smuggling has helped inspire me to adopt a more complex perspective in my own work. I was researching a people smuggling network that operated between Czechoslovakia and Germany in the early interwar period. Police apprehended recruiters and drivers in the fall of 1922 and left a paper trail. These investigative reports described the smugglers as “unscrupulous agents” who took advantage of naïve and desperate emigrants in Hungary, Czechoslovakia, and Poland with promises of passage to America.8 The smugglers would then supposedly abandon the migrants in Berlin to find their own ways, along with thousands of other East Europeans stuck in transit. I initially took this negative portrayal at face value, believing the smugglers had simply been con artists who did not care about their clients. I scoffed at a quote from one of the young drivers who had transported migrants by car, claiming he had “acted out of pure human kindness and demanded nothing for his troubles.” However, a fellow migration scholar pointed out that there might be some truth in this smuggler’s statement. A person can have multiple motives and make a profit off what they consider good and moral work. The demographic information recorded in the police reports could be used in another way: to help understand why the smugglers engaged in marginal, illicit economies. Thus, I decided to explore the complex backgrounds of these smugglers and their relationships with their clients.9

Background knowledge on smugglers can be difficult to obtain (they usually don’t like to be caught). It is not surprising then that fiction and impressionistic ethnographic essays, such as those by Joseph Roth, provide a beginning point for understanding these individuals and networks. I certainly do not seek to absolve smugglers who abuse or abandon their clients, yet I am suggesting the need to recognize that a number of smuggler networks are trusted and continuously used. Such networks provide a service for people who are economically or politically unable to go through legal avenues. They usually also have rich enough background stories to warrant a Disney prequel. If people are willing to suspend preconceptions and empathize with a fictional smuggler in a galaxy far, far away, certainly historical and modern-day smuggler narratives are worthy of study and closer analysis.

Allison Schmidt is a historian of Central Europe who is currently turning her dissertation, “Crossing Germany: Eastern European Transmigrants and Saxon State Surveillance, 1900–1924” (University of Kansas, 2016), into a book.

This blog post is based on a paper presented at the Jews, Money, Myth: International Workshop, hosted by the Pears Institute for the Study of Antisemitism at Birkbeck, University of London, on June 17, 2019. Thank you to the workshop organizers and my fellow panelists for their comments.

Book cover image via the Ludwig Rosenberger Library of Judaica. 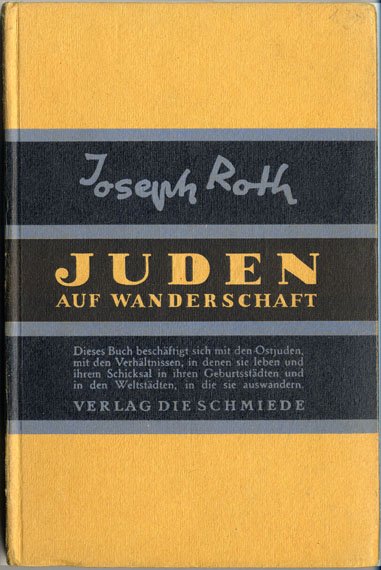 W. F. Whyte's 'Street Corner Society' became a popular text for sociology students, but specialists in Italian American studies never warmed to it. Donna Gabaccio explains why with "a hidden history of gender and ethnic dynamics" in the academy.

‘The Book That Would Not Die’

Nov 13, 2020
Donna R. Gabaccia
Looks at travelogues and guidebooks available in two Baden libraries in the 1890s to determine the knowledge of the USA, and particularly of American women, presented therein.

Dec 23, 2022
Marie Nella Hoffmann
News about various contributions and awards from the Migrant Knowledge Network. Members are invited to share theirs as well.

News from the Network

Aug 12, 2022
Glenn Penny highlights aspects of children's go-between role in Chile not visible in histories of European migration to the United States. German schools in Chile and teachers posted there from Germany are central to this multigenerational story.