An 1853 Map for German-Speaking Emigrants 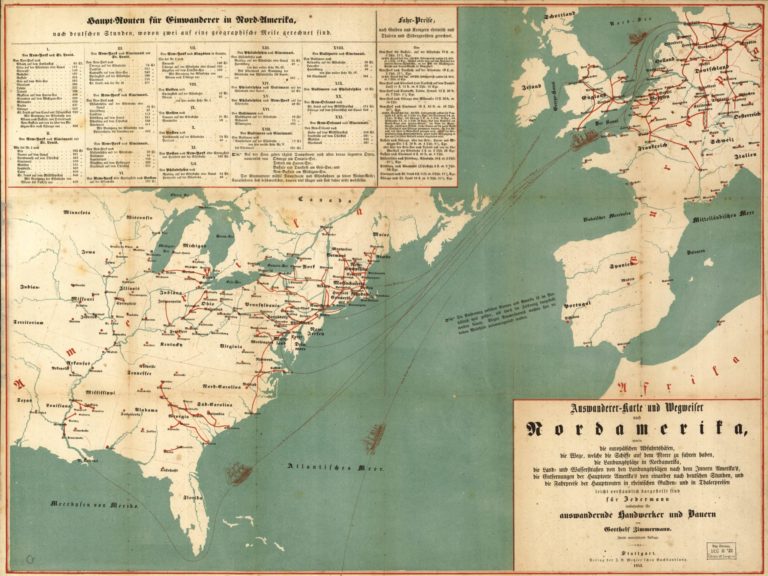 The title-cum-description of the above German map from 1853 reads:

Emigrant Map and Directions to North America, containing the European ports of departure, the routes that the ships follow at sea, the disembarkation points in North America, the land and water routes from the disembarkation points to the interior of America, the distances of the main American towns and cities [Hauptorte] from one another in German hours, and the cost of the trip on the main routes in guilder and thaler. Presented in an easy to understand form for everyone, especially emigrating artisans and farmers.

Look at the map in high resolution, and a few things stand out.1

Just to the west of Spain is a note about how the map has had to compress the distance between Europe and North America to fit everything in. Was this note added so the mapmaker or publisher would not look ignorant? Or did one of them think the would-be user would not understand the distances? If the user was literate, would not he (the map was aimed at men) have already learned some basic geography in school? In any case, the question of literacy and geographic knowledge would be of interest to anyone wishing to study migrants in this time and place.

An 1852 advertisement in the Leipziger Zeitung certainly sought a market with those who might not be conversant in foreign typeface:

This large map, printed in 3 colors, distinguishes itself from others through its cheap price, its clarity, and all the names are printed in German typeface so that they are easily understood by people with less experience reading Latin type.

We are in mid-nineteenth-century German-speaking Europe, and we seem to be dealing with a perceived market of people from the more developed parts of the region insofar as the eastern parts of German-speaking Europe are missing. But how did the mapmaker know this was his audience? What did the timing of this map have to do with the socio-economic and political changes that coincided with the mid-century European revolutions? Emigration was certainly pronounced enough by this time for the publisher to notice an opportunity.

A history of the publisher, Metzler, discusses the difficult book market in this period and how the business reacted by offering something in almost every niche it could think of. Metzler advertised its emigration map in the papers and offered special rates for bulk orders by emigration agents.2 It was still selling the map, now in its fourth edition, in 1854, as a March 12 advertisement in the Kemptner Zeitung shows. And the map was listed in the book trade’s Allgemeines Deutsches Bücher-Lexikon as late as 1858.

The sheer volume of detailed information in the map also raises the question of how the mapmaker assembled it. What advertising and promotional materials could he draw on? Newspapers? Firsthand reports from sales agents or people who had already emigrated? Related guidebooks or maps? Train and ship schedules? In any case, the information conveyed by this map was part of a broader ecosystem of knowledge of varying reliability bound up with the experiences and agency of those who had made or would make the journey.

Moving one’s focus from Europe to North America, the modern-day viewer might pick a familiar region and ask why this or that town made the cut of the main places one might need to know about. For me, that region is rural New Hampshire, not remembered as a go-to destination for German migrants in the nineteenth century. How did a small town like Guilford—population 2,432 in 1850—make the list? And the somewhat smaller Hanover (home to Dartmouth College)? Perhaps the mapmaker knew little about these places and had simply cribbed a few towns from other maps. Or had there been reports from earlier migrants? Or efforts from land developers to bring people in? How, in fact, did migrants learn about where they might go to make a new life?

Scholars adopting the kind of perspective I employ here speak of migrant knowledge.3 In part, this means studying knowledge about migrants, which arose in specific historical circumstances and still informs the historical record through its impact on legislation, administration, and record-keeping, not to mention the business of migration facilitation.4 The emigrant map here can certainly be interrogated from the last perspective.

Migrant knowledge also refers to the knowledge of migrants themselves. Focusing on it can help us to apprehend migrants as much more than targets of regulation and sociocultural interventions by the state and other actors in the host society. Their voices, motivations, and knowledge might be difficult to uncover or reconstruct, but we still have to ask about them.5

Mark R. Stoneman is an independent editor and historian based in Washington, DC. He is a coeditor and cofounder of the Migrant Knowledge and History of Knowledge blogs.
Suggested citation: Mark R. Stoneman, "An 1853 Map for German-Speaking Emigrants," Migrant Knowledge, January 30, 2022, https://migrantknowledge.org/2022/01/30/an-1853-map-for-german-speaking-emigrants/.
PrevPrevious
Post
Next
PostNext
archive and memory

Abstracts seven posts about migration and knowledge that were published at the History of Knowledge blog in the past two years.

Linking Migration and Knowledge: Seven Viewpoints at ‘History of Knowledge’

Mar 14, 2019
Mark R. Stoneman
Categorization schemes are never neutral and rarely comprehensive, but the question of how to handle them is thornier than one might think. How can we question categories and their confining walls given that those same walls also provide shelter?

Mar 7, 2022
Ulrike Bialas
The author looks at the relationship between two famous early sociological community studies, "Middletown" and "Marienthal." The latter became Paul Lazarsfeld's "ticket out of Europe just as the continent was descending into fascism."

Drifting Along: Unemployment and Interwar Social Research, from Marienthal to Muncie

Dec 28, 2020
Joseph Malherek
"Reconstituting the networks of the complex and mobile individuals through which indenture globally spread as a legal form of labor can sharpen our understanding of how migration practices and policies became universalized over the course of the nineteenth century..."