During the nineteenth century, more than 5 million people from the German states embarked on the transatlantic journey to the United States. Many of them stayed there, becoming one of the ancestral points of reference for today’s German Americans. Scholars became interested in these migrants during the 1970s and produced what can only be called a thriving and vibrant field of historical research, which has lasted for more than twenty years.1

While macro studies have portrayed German immigration to the United States during the nineteenth century as a mass movement brought about by materialistic factors in the home regions, micro studies have concentrated more on individual or collective contributions in the places and spaces the migrants ended up. In contrast to the celebrated German contributors who to this day have a place in America’s ancestral halls, the masses pushed by hardship have remained faceless. The resulting narrative imbalance is unsatisfying.

Fast-forward to the so-called Castle Garden data set, which the rise of digital history has made an interesting object for historical research. It contains information on about 11 million, mainly European immigrants who arrived in New York between 1820 and 1920. This data set includes about 4.2 million records for individuals whose country of birth was recorded as “Germany.” It thus provides a solid empirical basis for questioning and differentiating the “masses” narrative. In fact, though, analysis of such large data sets ultimately tends to reveal how much these narratives owe to historians’ use of older research methods, not to mention the adoption of historical vocabulary. Yet therein lies an opportunity to gain deeper insight into the socio-structural dimensions of a given phenomenon,2 in this case German migration to the United States in the nineteenth and early twentieth centuries.

The Castle Garden data set represents a valuable resource for revisiting, modeling, and analyzing this migration process in great detail by applying exploratory approaches.3 As is true of all “historical big data,” this set did not suddenly materialize out of thin air. It is the result of a contingent process of data production, at the beginning of which stood a massive and evolving act of knowledge production initiated by the Steerage Act of 1819. The initial thought behind this act was twofold. On the one hand, the aim was to control and ensure the limitation of the number of passengers a ship was allowed to carry by demanding passengers lists from the ships captains. On the other hand, the information collected in these lists was to be given to the secretary of state, who then had to inform the United States Congress in its sessions on immigration—an early manifestation of the governmental hunger for knowledge in modern nation states.

In our own recent past, all passenger lists in the archives of the secretary of state were transcribed into a digital format in an act of crowd-sourcing. Together, this digital collection became what we now know as the Castle Garden Dataset. Although this is in some sense old news, it gains new relevance in light of the history of knowledge, which poses some challenges for working with the dataset.

U.S. Immigration and the Production of Knowledge

In a digital history, thoughts regarding the emergence of the dataset are first and foremost goal-oriented. They aim to assess the epistemological value of the dataset. At the same time, such thoughts can very well become the starting point for a history about the administrative act of knowledge production in its own right, one not limited to German immigrants. In this case, not only the fact of the 1819 governmental edict to register immigrants in passenger lists is of interest but also the discourses and practices leading up to and surrounding the actual process of administrative knowledge production in the nineteenth and early twentieth centuries. It was all part of the same migration regime in which multiple actors negotiated the conditions of transatlantic mobility over and over again.4

In this context, the knowledge produced by filling out passenger lists was seen as a valuable administrative and political resource. The Steerage Act was augmented several times in the following years, until it was finally replaced by the Carriage of Passengers Act in 1855, when epidemic outbreaks were believed to be spreading because of immigrants arriving on overcrowded ships. The act regulated conditions on board arriving ships more strictly. Additional information on passengers was now required. Besides personal details like age, sex, and occupation, information regarding the individual immigrants’ destination in the United States was called for. It stands to reason that this extension of the production of knowledge about immigrants was linked to new hygiene policies, which also led to the establishment of the Castle Garden immigrant depot in 1855. A desire to know who immigrated with whom as well as a potential to track these individuals or groups after their arrival might have motivated the newly created categories of knowledge.

The actual discourses and interest-driven negotiations that led to the Carriage Passenger Act, however, are to this day still largely unknown. The same is true for the Steerage Act and its augmentations. In this respect, the growing role of knowledge production in the nineteenth-century U.S. migration regime is still largely unrecognized and merits scrutiny.

Another aspect of this knowledge production entailed the actual act of writing down information into the so-called customs passengers lists on board the ships. As the dataset shows, idiosyncrasies were quite common in this process. The practices of writing down the information required by the immigration acts turned out to be less straightforward than legislators might have imagined them to be. Because such issues influenced the quantity and quality of what the secretary of state could report to Congress, these subtleties mattered. In fact, they need to be understood as constitutive elements of the migration regime.

Some categories of the dataset, for example, suggest a lack of rigor in how they were filled out. Required attributes were seldom recorded consistently. Another issue was language, which could produce a range of effects on the ships and at times even counteract the administrative drive for ever more knowledge.

Applying Insights from the History of Knowledge to Migration Data

Considering the historical context of the sources as well as recent discussions in the digital humanities, it is clear that the Castle Garden dataset is not a collection of neutral information.5 Instead, it has to be recognized as the output of an intentional and policy-driven administrative process that was part of a knowledge-based migration regime. Simply analyzing it in search of migration structures, patterns, and dynamics would mean reproducing categories and attributes that are rooted in the historical assumptions and biases that shaped the dataset in the first place. At the same time, not using the dataset would mean remaining at the current status quo, in which the collective subject of the “masses” stays faceless. The myriad possible historical findings that could further our understanding of the migration process by providing differentiation and identifying marginalized phenomena would remain locked in the dataset.

To overcome this dilemma, the concept of reflexivity could become helpful. Indeed, reflexivity as an approach in migration research could change the positioning of the whole field of research. This would be achieved by recognizing the role of research and analyzing its output in regard to how specific epistemological, methodological, and political modes of knowledge production relate to power structures and prevailing epistemes in the past.6 For historiography that inevitably is restricted to using the output of past acts of knowledge production, this means not only reflecting on how our narratives influence contemporary societal discourses. It also means looking at the input that goes into historical research and considering the role of contingency in the formation of historically produced datasets, the historical sources, so to speak. The anthropologist Heike Drotbohm and the sociologist Boris Nieswand point out, however, that such an awareness of the constructive character of knowledge does not necessitate a radical renouncement of empirical approaches. Instead they identify a trend toward increased empirical complexity,7 which opens a space for including reflexive and nonreflexive approaches in hybrid project designs.

In a way, knowledge about the historical contingency of the Castle Garden dataset means that a historian who aims to use the data for digital research of the process of German immigration to the United States during the nineteenth century must inevitably become self-aware and end up contributing a piece to a blog about migrant knowledge.

When working with the dataset, this awareness first and foremost makes it imperative for me to consider concepts of digital source criticism and the ways they are conducted. It becomes necessary to thoroughly reverse engineer the dataset, so to speak, by researching its history and then applying this knowledge in the process of interpreting the findings that originate from analyzing the dataset.

The broader idea here is that historians must embrace the hybridity of inbetweeness inherent in projects requiring both empirical and reflexive approaches. Historians must be able to maintain awareness of the epistemological limitations and blind spots that come with their research data and at the same time find ways to flesh out genuinely new insights into the historical processes that the data tries to describe. Doing so in my case has meant taking initial steps toward a history of U.S. authorities’ administrative production of knowledge about immigration in the nineteenth and early twentieth centuries. At this point, it would be a pity to not continue for there is a clear transnational connection between people’s mobility and the administrative reaction to it.

Sebastian F. Bondzio is a historian at the Department for Modern History and Historical Migration Research at Osnabrück University. Currently he is the Gerda Henkel Fellow for Digital History at German Historical Institute Washington and the Roy Rosenzweig Center for History and New Media at George Mason University. 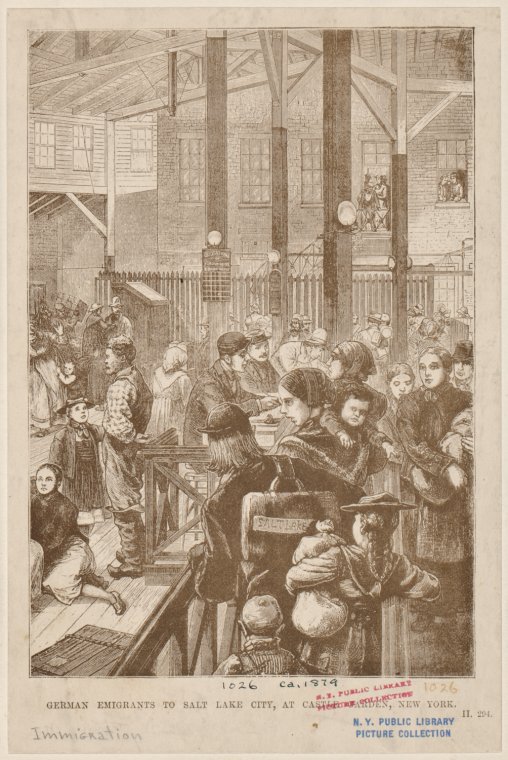 Looks at travelogues and guidebooks available in two Baden libraries in the 1890s to determine the knowledge of the USA, and particularly of American women, presented therein.

Dec 23, 2022
Marie Nella Hoffmann
Analyzes the content of a collection of letters from a Baden emigrant to America to determine the knowledge he shared back home.

Nov 29, 2022
Hannah Laubrock
"Reconstituting the networks of the complex and mobile individuals through which indenture globally spread as a legal form of labor can sharpen our understanding of how migration practices and policies became universalized over the course of the nineteenth century..."

Jun 17, 2019
Nicholas B. Miller
Migration strategies and state regulative measures exist in a dialectical relationship. The author looks at state efforts to control emigration from the Habsburg monarchy and the efforts of migration facilitators to satisfy demand for passage to South America.