When Mark Turkow (1904–1983), a well-known Jewish journalist and Yiddish cultural activist from Warsaw, Poland, traveled to Nazi Germany in August 1933, he was frightened not only of what he had to expect beyond the Polish-German border but also of the border crossing itself. In a long travelogue he published shortly thereafter—one in a series of articles in Der Moment, one of the oldest and most popular Yiddish dailies,1 he vividly described his experience:

I am afraid of further engaging in a conversation with the [German] conductor because I learned from my previous travels to Hitler country to be careful with words and to protect myself from everything alien. The tiniest word, which can slip a human's lips and which is against the spirit of these our days, can become for one very, very costly. … The number of border officials was scaled up impressively and although everyone is very kind to you, you feel that they throw sharp views in your direction. They look at the passports closely, but even more so at the luggage, where they search for goods that are subject to the border custom rules like a lot of literature is. If you want to be safe in Germany, it is best to not bring any enemy flyers, books or magazines except, of course, pro-Hitler literature.2

His travelogue continued with descriptions of his visits to German cities, including Berlin. These detail the atmosphere and the internal mechanisms of the new German antisemitism, as well as how it felt to be Jewish under the Nazi regime. These latter characterizations, especially, distinguished this travelogue greatly from others by Jewish Polish writers of that time, despite the similarity of its ethnographic and precise portrayals of people and scenery. The specific information he provided on how to best behave when traveling to Nazi Germany as a Polish Jew also made it stand out. In addition to advising readers to remain quiet when passing the border, he gave them specific knowledge on what to bring and leave behind. In this way, his personal experience helped future Jewish travelers or migrants passing through Germany from Poland to stay safe while on the road.

In the last decade, interest in Jewish travelogues from Eastern Europe, especially in Yiddish, has grown within Jewish and literature studies.3 Most of this scholarship focuses on travelogues as a specific genre, examining the relationship between “the self” (the author) and “the other” (the place and the local cultural traditions and ethics of both Jews and non-Jews the authors encounter). Numerous other studies elucidate travelogues as windows into distant and “exotic” places that share views often based on ethnographic observations and personal experiences just as much as on political agendas.4 Yet these travelogues have rarely been discussed within the framework of migrant history,5 despite their strong potential as sources in this field, particularly in relation to questions of Jewish migrants’ agency.6 This potential resides, as one can already discern from Turkow’s travelogue, precisely in their ability to convey knowledge future migrants could utilize in their own journeys.

Travel for Pleasure and Forced Travel

During the 1930s, Turkow wrote travelogues not only about Nazi Germany and other countries but also about distant places like North America and Argentina.7 While most of his reports were originally published individually in Poland’s Yiddish press, several were jointly republished in book form shortly thereafter due to high demand.8 However, his popularity as a journalist was not the sole reason for this. Rather, one must regard his travels and writings as part of a bigger lifestyle trend among Polish Jews. Peaking in the 1930s, this trend was tightly interwoven with processes of modernization, urbanization, and rising mobility.

In the 1920s and 1930s, ever more people were able to travel for pleasure and explore their environment with curiosity. While such practices had long been a privilege of aristocratic and, later, bourgeois people, industrialization, globalization, and urbanization had forged a demand for new forms of relaxation and movement among the middle and working classes. Eastern European Jews were also attracted to the idea of tourism as a combination of adventure, relaxation, and travel, and the landkentenish movement, in particular, which included various Jewish organizations, public figures, and intellectuals, promoted local tourism—that is, touring the Polish countryside—among Polish Jews.9 Founded in 1926, the movement even had its own publications, which regularly featured travelogues from abroad. In its promotion of tourism, the movement aimed to lift the burden of the poor Jewish workers, who often lived and worked under precarious conditions in Warsaw and other Polish cities, by bringing them out into the nature.

Yet, as historian David G. Roskies argues, the landkentenish movement also constituted a Jewish answer to antisemitism and state suppression.10 Its Jewish travelogue writers had more then entertainment in mind when they made a case for Jewish mobility. Well aware of the economic distress and growing poverty among Polish Jews, as well as rising antisemitism, many Jewish cultural elites advocated emigration to alleviate Jewish hardship. Therefore, it is not surprising that 165,000 Polish Jews migrated to the United States alone during the interwar period.11 Seeing migration as an opportunity to create a new Jewish life and culture in the Diaspora, travelogue writers often focused on Jewish centers within the Diaspora, highlighting an interconnectedness between Jews in the old world and the new. In addition, many travel writers wrote from the perspective of an average Eastern European Jewish immigrant rather than that of a more privileged person, helping readers to imagine themselves taking part in the journey.12 Most of the travelogues dealt with the United States, Argentina and Palestine, the principle destinations for Eastern European Jewish migrants at that time.13 Even so, one exceptional travelogue described the Soviet Union (especially Birobidzhan), which was less a migration destination than a political beacon for the socialists and communists among them.14

Travelogues as a Form of Migrant Knowledge

In light of the juxtaposed trends of travel for pleasure and forced travel of that time, most contemporary travelogues, especially those comprising parts of ongoing series, can be seen as manuals of a sort on “how to migrate and settle in a new home.” They feature stories about possible migration routes and modes of transportation (e.g., ship, train) and convey knowledge about contacts upon arrival. In his 1939 travel book Amerike, dos land fun vunder (America, the land of miracles), Yankev Kirshenboym (1885–1946), who had himself migrated to the United States in 1897, not only entertained readers with an adventurous and “exotic” account of the US but also shared knowledge of different aspects of living there. He focused especially on New York City, where most of the Jewish immigrants from Eastern Europe had previously settled.15

The book opens with a chapter on Ellis Island, its history within the Jewish context, and its appearance and function in the immigration process, while the subsequent chapters focus predominantly on Eastern European migrant Jewish life in New York. Kirschenboym took readers on a trip through the city, describing Jewish spaces and where to find them. In one chapter, he went to Café Royal, a famous coffeehouse where New York artists mingled with European intellectuals, Yiddish writers, socialists, and other rebels. In another chapter, he visited the Lower East Side, introducing the vibrant Eastern European Jewish migrant life of Delancey Street. Yet practical advice was also abundant: he dedicated a whole chapter to New York City’s most important libraries, detailed accounts of the local cuisine, nightlife, new technologies, and instructions for traveling in the countryside by bus.

Like Kirshenboym’s travelogue, Turkow’s abovementioned travelogue on Eastern European Jewish life in Argentina was also published in 1939. It focused on the preceding fifty years, highlighting Argentina’s Jewish agricultural colonies, which so impressed Turkow that he dedicated the book to the Jews who had migrated to the country years before, transforming the “Argentinian steppe into flourishing fields” through hard work and personal sacrifice.16 An impressive account of Jewish daily life and culture in Argentina, Turkow’s travelogue maintained that these colonies were worth the troubles the immigrants had endured. The very same year the travelogue was published, Turkow himself migrated to Argentina, where he would become an influential kultur-tuer of the Eastern European Jewish migrant community. This made him a credible and powerful advocate for migration. His travelogue no doubt inspired other Polish Jews to try to leave the economic distress, antisemitism, rising fascism, and threat of National Socialism behind and find a new life in Argentina as well.

While the rise of Yiddish travelogues as a literary genre partly resulted from the Jewish folklorist and ethnographic movement, which aimed to collect and preserve cultural rituals for future generations and raise Jews’ consciousness about their own history, they did far more than this. For one thing, they were entertaining, providing relief from hardship and oppression—a virtue in itself. Yet, for another, many had a political agenda. The writers, regarding travel as liberating, wanted to motivate readers to travel themselves; some of them actively advocated emigration as a means to escape economic distress and antisemitism. Furthermore, travelogues contributed to a more general discussion within the Eastern European Jewish community about how and where one could best enjoy a liberated, emancipated, and self-determined Jewish life.

Within Jewish and literary studies, travelogues are often analyzed with special regard to the images they transport of the “other” and the “self.” However, they can also be seen as valuable sources of shared migrant knowledge. When Jews in Poland read these travel writings in the Yiddish press, they could imagine a life for themselves in the places the authors brought to life. The texts also provided important information and advice, facilitating their migration decisions and guiding them along the way and after resettling when they did. Therefore, the travelogues were more than just literature. They were a means of migrant self-help and a vital part of the Eastern European Jewish struggle against antisemitic oppression and for a self-determined life.

Anne-Christin Klotz (@acklotz) is a postdoctoral researcher at the Martin Buber Society of Fellows at the Hebrew University of Jerusalem. Her PhD thesis on the Warsaw Yiddish press and its struggle against Nazi Germany was recently awarded a special distinction by the jury of the Scientific Research Award of the Polish Ambassador to Germany and was just published with De Gruyter: Gemeinsam gegen Deutschland. Her current work focuses on Eastern European Jewish landsmanshaftn as a means of migrant self-help during and after the Shoah. 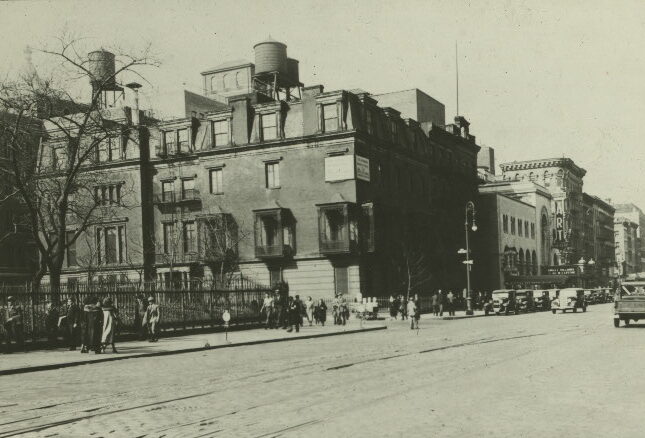 New Book from the Network: Yiddish Press in Poland in the Nazi Era

Oct 11, 2022
Anne-Christin Klotz
What migrants relay about a host country to their country of origin is shaped by competing pressures that transform knowledge. The reports of two London-based correspondents to prerevolutionary Russia illustrate this point.

Between Fact and Fiction: The Fabrication of Migrant Knowledge in Professional and Personal Correspondence

Dec 16, 2021
Anna Vaninskaya
How to name people who move their lives across borders willingly or under duress? Eliyana Adler discusses the diverse terms contemporaries used to identify the various groups of Polish Jews who survived World War II as refugees in the Soviet Union.

What’s in a Name? How Titles Construct and Convey Knowledge about Migrants

Jun 18, 2020
Eliyana R. Adler
The author expected to find files in Paris for his study of Franco-Yiddishness in the interwar period, but they had wandered elsewhere. His surprise led him to consider "the migratory history of knowledge and knowledge-making."