Slavic Studies as Migrant Knowledge: The Case of Max Vasmer

The German Slavist Max Vasmer (1886–1962) is best known for his Russisches Etymologishes Wörterbuch (Russian Etymological Dictionary, 1950–1958), which is still highly regarded among linguists of Slavic languages. There was even a posthumous Russian, extended edition (1964–1973), a rare Soviet tribute to a Western scholar at the height of the Cold War. These, however, were only two of Vasmer’s many achievements in the field of Slavic studies. Born in Saint Petersburg and trained in the Russian academic tradition, he emigrated in 1921 to Germany, where he helped to emancipate Slavic studies from its subordination to Indo-Germanic philology, enabling it to develop into a philology in its own right. Notwithstanding his critical attitude toward both Nazis and Soviets, not to mention the support he provided their victims, he managed to steer clear of open confrontations and, as a scholar, emerged unscathed from World War Two. In postwar West Germany, he helped to reestablish Slavic studies in Germany, this time in an area studies framework, reflecting the geopolitical interests of the Cold War era.

Vasmer’s career spanned sixty years and several major systemic crises that directly affected where he lived and worked: World War One, the Russian Revolution, and World War Two saw him migrate, forcing him to adapt to changing political and academic settings. At the same time, however, he actively participated in these changes and in doing so affected his new surroundings. Vasmer’s diverse scholarly activities, his international mobility, and his extensive social network not only testify to the value of thinking about migrant knowledge but also lend credibility to a broader, bolder claim, namely that Slavic Studies in general and in German-speaking countries in particular can and should be studied from the perspective of migrant knowledge.1

Slavic studies emerged in the nineteenth century in the wake of the linguistic nationalism that spread throughout the European continent, claiming that peoples, defined as language communities, were entitled to their own nation-state (self-determination of nations). This was particularly the case in Slavic communities under Russian, Ottoman, or Habsburg imperial rule that defined themselves in opposition to the dominant language community. Until at least the end of the First World War, the major “language of oppression” in East Central Europe was German.2 In fact, this circumstance had a major impact on the development of Slavic studies in the region. It became part of the educational system, which viewed the Slavic world as a potential threat to the dominance of German culture. At the same time, it provided linguistic and cultural arguments for the aspiring Slavic nations.

After World War Two, Slavic studies in German-speaking countries subscribed to the logics of the Cold War, identifying with either the interests of the West Bloc or those of the East. From the very beginning, Slavic studies as both a philological discipline and an area studies field has been characterized by a high number of specialists from the region under scrutiny. As such, these scholars should be not only subjects who conduct research but also the objects of this research. Their migration background provides them with “specific types of knowledge that are backed by specific sources of authority and enjoy unequal social and cultural currency.”3 In fact, by studying the biographies of key players in the field of Slavic studies, by exploring their migrant trajectories in space and time and identifying their historical and professional networks, we can shed light on the development of the field of Slavic studies itself.

Max Vasmer’s Migrant Trajectory and the Circulation of Knowledge

On the basis of Vasmer’s biography and scholarly legacy, derived from both published and unpublished sources, we can reconstruct Vasmer’s academic network (persons, places, and times) over the course of his long career and establish how, where, and when he mediated or initiated the circulation and dissemination of “Slavic” knowledge.

Vasmer was a Russian national and ethnic German who grew up in a bilingual environment in Saint Petersburg. He trained in the Russian and later Austrian imperial traditions with prominent scholars such as the Polish Jan Baudouin de Courtenay (1845–1929) and the Croatian Vatroslav Jagić (1838–1923), who themselves had multilingual and multicultural backgrounds. In 1921, Vasmer received an appointment as full professor at the University of Leipzig and left Russia for good.

From the very beginning, Slavic studies in Germany and elsewhere had drawn on both Western and Eastern European scholarly traditions. It operated as a mediator between East and West, with migrant scholars playing a key role. Vatroslav Jagić, one of the founders of German Slavic studies, brought the Viennese philological tradition to the University of Saint Petersburg in 1880, and Max Vasmer, in turn, brought the Russian scholarly tradition of Slavic studies to Leipzig and Berlin some four decades later.4

Vasmer himself addressed this cross-fertilization of German and Russian scholarly traditions and the circulation of ideas between German and Russian Slavic studies in his overview of the development of the field in Germany.5 Whereas German linguists developed comparative-historical methods, Russian academics focused on empirical data, notably the description and documentation of Slavic languages and dialects. Vasmer himself enriched the methodically stronger German tradition with Slavic language diversity. Apart from that, he laid the foundations for the study of language contact between Slavic and Balkan dialects in accordance with the prerevolutionary Russian tradition. In so doing, he contributed to the development of Slavic studies as a discipline that dealt with all Slavic languages, including unwritten and contact-affected dialects.

In 1925, Vasmer moved to the University of Berlin, which had already become the center of Slavic studies in Europe thanks to the efforts of (again) Jagić and his successor Aleksander Brückner (1856–1939), the last a Galician scholar of Polish-German origin.6 Like his predecessors, Max Vasmer steered Slavic studies away from marginal status within historical-comparative linguistics, helping it to attain the status of a distinctive philology, with its own aims and methodologies. During his time in Berlin (1925–1949) Vasmer played a key role in the development of German Slavistics not only through the creation of new, independent Slavic studies institutions and the founding of scholarly book series (Veröffentlichungen des Baltischen und Slavischen Instituts [Leipzig], Grundriss für Slavische Philologie und Kulturgeschichte, [Berlin]) and journals (such as Zeitschrift für Slavische Philologie) but also as a scholar in his own right, mainly in the field of historical linguistics.

Vasmer’s main achievement in this domain was his Russian etymological dictionary, which he compiled between 1938 and 1950. He borrowed the idea from Aleksander Brückner, the author of the first Polish etymological dictionary (1927) and his predecessor at the University of Berlin, a man with whom he struck up “a life-long paternal friendship.”7 In 1959, shortly before his death, the Soviet Academy of Sciences decided to translate and publish the magnum opus of its foreign member and assigned the task to the then young Soviet Slavist and future academician Oleg Trubachev (1930–2002). In this way, the émigré Vasmer, who had preserved and further developed the prerevolutionary Russian tradition of historical linguistics, helped it return to the scholarly community in which it had been all but liquidated almost half a century later.8

Vasmer not only contributed to the creation of the Leipzig onomastics school and the development of Slavic studies in Berlin (he switched to West Berlin’s Free University in 1949, his previous university being now located in the East German capital), he also initiated Sorbian studies in Germany. His student Paul Wirth (1906–1946), himself Sorbian, published a Sorbian linguistic atlas (1933–1936).9 Another student of Vasmer’s, the Silesian Reinhold Olesch (1910–1990), devoted his doctoral thesis to Silesian dialects (1937).10 Vasmer’s interest in languages in contact and in minority languages went back to his teacher (and one-time father-in-law) in Saint Petersburg, Jan Boudain de Courtenay. Under Courtenay’s influence, Vasmer had shifted his focus from the official, administratively established Slavic languages to the languages of Slavic minorities and Slavic dialects, encouraging representatives of these communities of “small” languages to study them. In so doing, he further enhanced the presence of Slavic native speakers, some of them migrants, in German Slavic studies.

Vasmer as Mediator: Insider or Outsider?

Although a multilingual migrant background could be an asset in German academia, it could be a threat as well. Under the Nazi regime and during World War Two, but also during the Cold War, these migrant specialists had a “suspicious” identity and therefore had to tread carefully, striking a balance or seeking a compromise between ideology and scholarship.11

Under the Nazi Regime, Sorbian, Silesian, and Polish intellectuals were persecuted, the use of their languages forbidden in public and in education. Slavic libraries were destroyed.12 Olesch’s Habilitation (the second, advanced dissertation needed to become a professor) on a Silesian topic was confiscated (1939), and he was sent to the Eastern Front. Studies on Sorbian and Slavic place names were forbidden. Slavic studies became both politically sensitive and politicized. Vasmer, however, continued to supervise doctoral theses—even of Jewish students, sometimes under an assumed name—and intervened on behalf of Polish and Russian colleagues (among them Boris Unbegaun) in Nazi concentration camps so as to improve their living conditions or obtain their release. When Dmitrii Tchizhevskii lost his academic post because of his Ukrainian background, Vasmer organized a position as a Russian lecturer for him. After the war, this courage gained Vasmer a visiting professorship in Stockholm at a time when German academics were generally met with suspicion. During his Stockholm period, he managed to restore the data for his etymological dictionary that had been lost during the bombardment of Berlin in 1944. Meanwhile, his own brother, Richard (1888–1938), a renowned expert on Arabic and Oriental studies and numismatics, had died in a Soviet camp in Tashkent, but Max only learned about this fate after the war while negotiating a book exchange program between Soviet and German university libraries.

Notwithstanding the turbulent times in which Slavic studies fell victim to geopolitical and ideological battles, Vasmer created a scholarly network and tradition that produced several generations of Slavists. Many of them suffered a tragic fate, either dying in concentration camps or seeing their academic careers destroyed by the war, when they often served as translators on the Eastern Front, and subsequent Soviet captivity. Others, however, laid the foundations of postwar Slavic studies institutes in Germany and Switzerland, including Margarete Woltner (1897–1985), Alfred Rammelmeyer (1910–1995), Dmitrii Tchizhevskii (1894–1977), and Reinhold Olesch (1910–1990). Like Vasmer, many of these scholars had a background marked by migration. As a consequence, the development of Slavic studies in German-speaking countries cannot be understood without taking into account Vasmer’s pioneering role, both as a migrant and a scholar.13

Vladislava Warditz is a lecturer (Privatdozent ) at the University of Potsdam. She is currently working on a project about Max Vasmer, funded by the Gerda Henkel Stiftung, out of which she wants to develop a theoretical and methodological framework for a larger project about migrant knowledge and Slavic studies.

Wim Coudenys is a professor of Russian and European cultural History at the University of Leuven. His main interests are the history of Russian emigration, the relationship between Russia and Europe from the eighteenth century to the present, and the role of networks in the circulation of knowledge about Russia in the West. 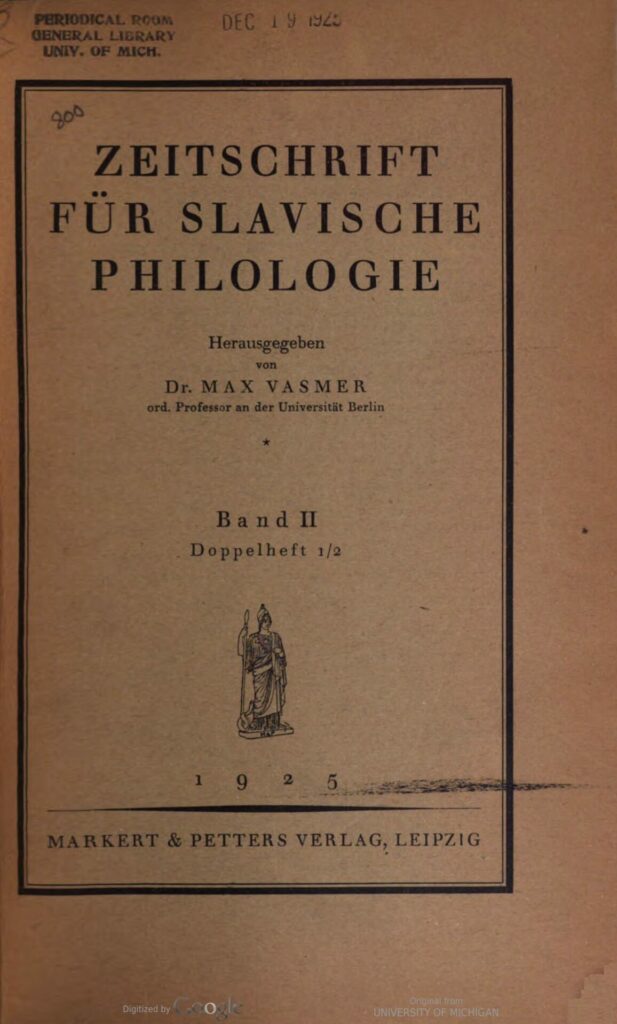 Hirschfeld's encounters with Islam and Muslims in Indonesia, India, and the Near East "taught him how closely connected the issues of sexual and cultural diversity were."

Nov 6, 2019
Razak Khan
"Migrant knowledge figures as a category of absence" in Europe. In Germany, one core issue is knowledge about recycling requirements and expectations. Efforts to teach it "betray an unreflective understanding of cultural identity."

Missionary FAQs: The Migration of Knowledge about and from Early Modern Jesuit Missions

Sep 2, 2022
Elisa Frei
Discusses a 1909 Syrian American advice book for Ottoman subjects planning to emigrate to the U.S., which contained knowledge about would-be immigrants' specific rights in the U.S. and self-fashioning tips for dealing with authorities there.