Chinese introductions to published collections of archival materials from the borderlands of the Qing dynasty (1644–1911) often begin with an account of things lost—lost territory and lost documents from the borderland administrations. In fact, calls for the restitution of archival documents from the period of the Qing’s greatest imperial reach have increased among archivists in China since the late 1990s. When estimating the extent of archival collections from the border regions, Chinese archivists and historians almost always include Qing dynasty documents that are not held in archives within the People’s Republic of China (PRC), and they refer to such documents as “lost and dispersed [sanshi ].”

One of the most interesting examples of a previously “lost and dispersed” collection is the so-called Manchurian Archive, which was removed from Qiqihar in today’s Heilongjiang Province in 1901. This assemblage from various administrative seats in today’s Heilongjiang and Jilin Provinces was so named by Russian sinologists who had followed the advancing Russian Imperial Army into Manchuria in the aftermath of the Boxer Uprising (1900–1901) and who had returned with the records to Vladivostok. Not restored to China until 1956, the archive provides Chinese archivists with a model for what they call “returned [huigui ]” documents.1

Against this background, I would like to discuss the history of administrative borderland documents from the Qing dynasty with an eye to the colonial legacies of source materials that many historians are working with today. Although the discourse on lost archives is linked to debates about the restitution of cultural artifacts of Chinese provenance by the former colonial powers, the positions of Chinese archivists and historians on the restitution of archival documents have so far received little attention in Western historiography. This is the case despite the fact that the discourse in China often highlights documents of particular interest to historians of migration—those once housed in archives in the Qing borderlands. These materials show contacts between Qing officials and foreigners, or they provide evidence of migration patterns and policies in the border regions of the empire.

The 'Migration' of Archival Documents

Bordering on Russia, Korea, the Qing protectorate of Outer Mongolia, and Qing-administered Inner Mongolia, Manchuria was one of the most contested border regions in the Qing dynasty. The governance of multiethnic and multilingual communities in the geographically diverse region posed specific challenges to the Qing administration. Only marginally studied, a large number of documents from the region have been preserved in the so-called Manchurian Archive. These documents are testament to the unique social and political composition of the communities administrated by the Qing bureaucracies.

The origins of the collection can be traced back to the Russian sinologist Apollinariy Vasilevich Rudakov (1871–1949), one of the founders of the Far Eastern Institute in Vladivostok, who led a group of researchers to Manchuria in 1900 and removed a large number of documents from the administrative seat (yamen ) of the Heilongjiang governor-general in Qiqihar.2 With the Far Eastern Institute founded only in the previous year, the institute’s library lacked study and reading materials on relations between Russia and her neighbors to the east, not to mention texts suitable for training the institute’s students in the languages of the peoples across the border. The campaign of the Russian army during the Boxer Uprising, therefore, presented a once-in-a-lifetime opportunity for the acquisition of previously unstudied materials in Chinese, Japanese, Korean, Mongolian, and Manchu. Rudakov and his team later also accompanied the Russian troops during their attack on the Manchurian city of Mukden, today’s Shenyang, during which the sinologists devoted most of their efforts to buying published literature.3

Despite the recognized value of the newly constituted collection for the study of Russian activities in the Far East, the documents remained largely untouched for several decades after 1901. In 1931, the collection was moved to the Soviet capital, following the establishment of several research facilities there. Nevertheless, a large-scale study was never conducted, and the materials again fell into oblivion, perhaps due to their sheer number and a lack of archival and research personnel proficient in Manchu, not to mention the political climate in the Soviet Union in the 1930s. Stored under inadequate conditions in the basements of various institutions in Vladivostok and Moscow, a significant number of the paper documents were severely damaged by mold and damp air, conditions at odds with the political and social importance attributed to the materials by Soviet archivists, historians, and politicians alike.

Not until 1955, some six years after the founding of the PRC, did the Soviet Union offer to return the archive to China in a display of solidarity between friendly socialist states. Facing the return of the documents, Soviet sinologists and archivists were tasked with categorizing and studying the documents. Then, in August 1956, the documents were transported to Beijing, where they again went unnoticed for several decades. Only in the 1980s did Chinese archivists commence with a systematic study of the collection, for which they had to rely on Russian-language catalogs from the 1950s.4 Today, the one-time Manchurian Archive is divided between the First Historical Archives in Beijing, the Archives of Jilin Province, and the Archives of Heilongjiang Province, with the last holding a majority of the documents.

Chinese calls for the restitution of artifacts currently held by former colonial powers such as Japan, France, Germany, and the United Kingdom, have gained increasing attention in recent years, whereas the issue of borderland archival collections seems to have been largely overlooked in the debate in the West. Chinese archivists, by contrast, often present the diplomatic efforts that preceded the return of the Manchurian Archive as a model for the restitution of other documents currently held in archives and libraries outside the PRC. Such claims have so far only resulted in large-scale copying projects.5 This trend stands in stark contrast to a rising number of restituted artifacts from museums in the West.6 Still, the subject of “dispersed and lost” documents continues to be raised by Chinese archivists and historians, especially since a speech by the deputy director of the National Archives Bureau, Liu Guoneng, at the First Session of the Ninth Chinese People’s Political Consultative Conference National Committee in March 1998.7

Collections from the border regions of the Qing empire are among the documents that Chinese archivists consider “dispersed and lost.” These include the Kwangtung Provincial Archives, taken by British forces during their occupation of Guangdong in the Second Opium War (1856–1869) and currently held in the National Archives of the United Kingdom, as well as the manuscripts discovered in Dunhuang (located in modern-day Gansu Province) at the beginning of the twentieth century and now held in various museums and archives all over the world.8 When citing other reasons for the loss of archival materials, some authors see themselves in the tradition of Niu Hong (545–611 CE) during the Sui Dynasty (581–619 CE), who described the loss of books during the “five disasters” in Chinese history, including the burning of Confucian writings by Qin Shi Huangdi (259–210 BCE), the first emperor of a unified China. It is important to note that among the reasons for a loss of documents, other causes like internal wars and the decomposition of bamboo and paper in humid climates or by pests and fungi are cited as well. The destruction of archives and libraries during the Cultural Revolution (1966–1976) and other sociopolitical disruptions after 1949, in contrast, is only rarely and superficially mentioned. For historians of China surveying the extent of the available source material for their research, such accounts can nevertheless be a great help.

With regard to archival materials from the Qing borderlands, accounts of losses are also connected to debates on Chinese national identity and the protection of Chinese cultural heritage. These can include references to former territorial claims of the Qing beyond the PRC’s borders and to a loss of “China’s sacred territories [Zhongguo shensheng lingtu]” to foreign powers in the nineteenth century.9 As such narratives go, only with the study of documents from these regions will Chinese historians be able to uncover the history of the borderlands and the lost territories.

In 2016, the First Historical Archives in Beijing published a similarly informed overview of archival collections of Qing provenance that can be found in Taiwan and other places outside the PRC.10 The article offered recommendations on how to proceed with the problem of “lost and dispersed” documents, especially with regard to archives from the Qing dynasty. The article urged archivists to compile information about holdings in foreign, including Taiwanese, archives that had been removed from local and regional Qing yamen. Further, it called for archivists to include the archives of foreign consulates, banks, and trading companies in this effort.

Several questions arise from this 2016 proposal. Does it mean that all documents produced by foreign institutions within the borders of the Qing empire should automatically be considered of Qing and, therefore, Chinese provenance? Would such an approach result in claims of ownership for all China-related source collections abroad? Further, when including archival collections in Taiwan in calls for a restitution of documents, should these documents even be considered “lost” to the PRC?

Finally, in light of increasing restrictions on access to archives for historians in the PRC, it is also important to note that the interests of Chinese archivists in the preservation of documents can be at odds with the research interests of historians, Chinese and foreign alike, who rely on access to documents in their original form.11 This holds especially true for the majority of documents from the former Manchurian Archive, access to which is nearly impossible in the Heilongjiang Provincial Archives. Moreover, with historians in Chinese reading rooms limited to studying digital copies selected by archivists on a case-by-case basis, the original constitution of a document within a larger document collection is almost unintelligible. On top of that, large-scale publication projects that include borderland documents, most notably from the ethnically diverse Western border province of Xinjiang, distract from the fact that access to entire collections of original documents has been gradually restricted in recent years. In the future, the problem of limited access to documents in Chinese archives most certainly will affect any serious debate about the restitution of archival collections to China.

Christina Philips is a postdoctoral fellow at the Max Weber Foundation (China Branch Office). Her research focuses on the history of late Qing provincial archives, Chinese foreign relations, and the history of modern China more generally.

Featured image: Map of China and Mongolia with parts of Russia and India, from a New Geographical Atlas in Ottoman script, 1896, via the David Rumsey Historical Map Collection, image no. 13621026.jp2. 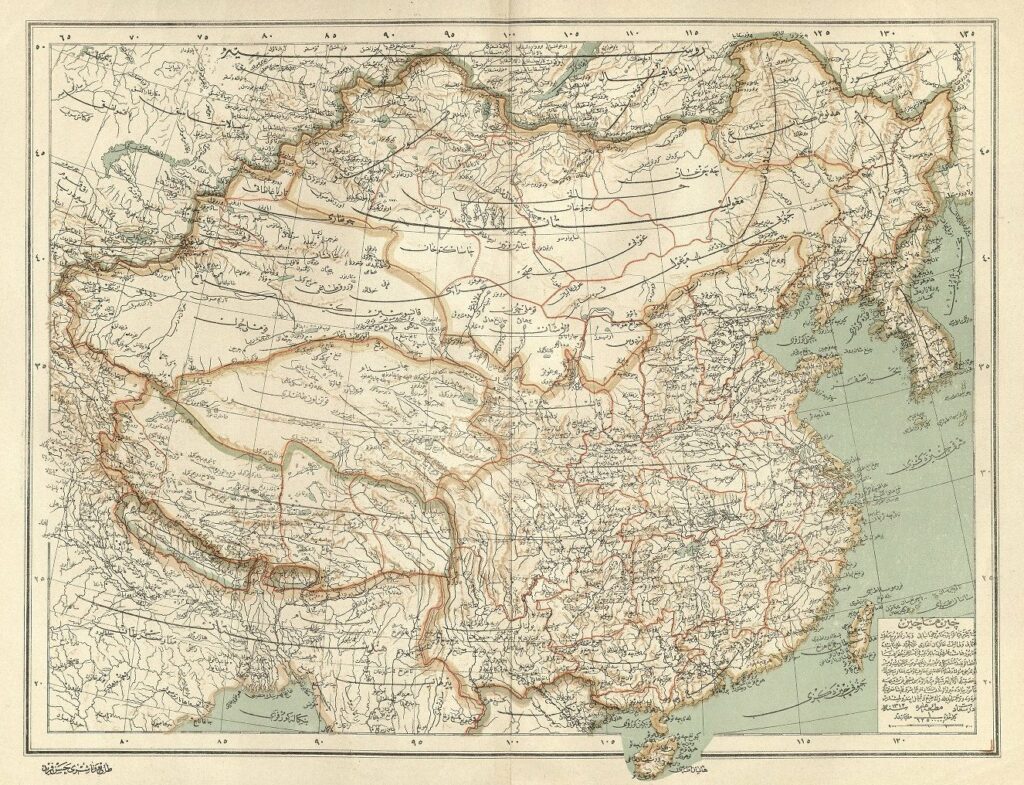 Hirschfeld's encounters with Islam and Muslims in Indonesia, India, and the Near East "taught him how closely connected the issues of sexual and cultural diversity were."

Nov 6, 2019
Razak Khan
Thinks about how migrant biographies and autobiographies can be used to understand associated knowledge transfer and translation processes, including their "success" or "failure." Examples are from Australia after World War Two.

Oct 7, 2019
Philipp Strobl
A researcher from Scotland, by way of Germany, examines a key text offered to international scholars at UC Berkeley during their initial orientation session there.

News from the Network: Migration and Knowledge Transfer