On November 8, 1891, the first issue of the newspaper Internationale Artisten Revue was published in Budapest, then the second residential city of the Habsburg Empire. It was this first edition that would establish a professional medium for "traveling artists" in the Habsburg territories. Ferdinand Steiner, a former Viennese artist and agent, now the editor of this newspaper, addressing its future readers on the very first page, emphasized the need for a medium that would connect the mobile artists: "The gradual expansion of the artistic world, the ever-increasing progress and the continuous struggle within the society to maintain the position it has already conquered make a completely independent organ that is to serve as a mouthpiece for the vital interests of the artistic community an urgent necessity.”1 The developments of the time—a growing entertainment scene, mobility, and a profession without social security—required a mouthpiece for artists. Yet, soon the medium would function as much more: It quickly developed into an important node of an international hub of artists. It operated as a publication organ for artist associations, venues, and agencies, and it acted as a protective institution for (traveling) artists—since, in many cases, they were or had to become migrants, themselves, to be successful in popular entertainment. In this blog post, I introduce my book entitled Auf die Tour, in which I investigate networks of migrant performers, in general, and the sites of popular entertainment as spaces for Jewish and non-Jewish relations, in particular. I focus on the cities of Budapest, New York, and Vienna around 1900 from the perspectives of global history, migration studies, gender studies, and cultural studies.

Media of Knowledge Dissemination in the Hub of Traveling Artists

Because of the increasing mobility, managers, agents, and other associates in the popular entertainment scene initiated a better organizational infrastructure: newspapers operating on an international basis and agencies supporting the traveling stars emerged. The Internationale Artisten Revue was one of them. Already in the first year of its existence, the weekly newspaper corresponded with cities all over Europe and was in constant communication with the popular culture scene in the US. As early as 1900, only nine years after its foundation, the Internationale Artisten Revue was corresponding with more than two hundred establishments and eighty agencies in more than sixty cities around the world.2

In Austria-Hungary, the Internationale Artisten Revue was the most widespread art journal; in the German Empire it was the newspaper Der Artist, founded in 1892. The New York Clipper was the English-language equivalent in the United States.3 These newspapers provided extensive information and networked with each other so that vaudeville managers were able to build international relationships, exchanging and evaluating forms of social insurance, simplifying transatlantic travel routes, and founding transatlantic associations. In doing so, the newspapers functioned as entities of knowledge transfer. They helped individual artists to gain valuable information about potential activities at future destinations. The newspapers also published warnings about cases of fraud. The performers used them to prevent from being exploited or to ask their fellow artists for help in case of fraud or exploitation.

The history of these newspapers and their interrelatedness is, in a sense, paradigmatic of the developments in popular culture at the turn of the twentieth century. In my book, Auf die Tour,4 I explore the “gradual expansion” of popular entertainment between Budapest, Vienna, and New York and the participation of Jews in it. Popular culture as a space for Jewish and non-Jewish interactions runs throughout the book, while I investigate the mobility in popular culture between the Habsburg Empire and the United States against the backdrop of the urban and societal changes of the time—the mass migration movement, the making of modern metropolises, and the emergence of mass culture.5 These newspapers form one of the main sources for my analysis. In addition, I analyze vaudeville programs, various ego documents of the artists, and visual artifacts on popular culture at the turn of the century to answer questions about which individuals or ensembles worked in several cities, what conditions framed their international activities, where they performed in the cities to which they traveled, how mobility affected their performance, and what migration, mobility, travel, and being on the road meant for the artists, their songs, and plays, among others.

Taking up these questions, my book Auf die Tour is about how, against the backdrop of mobility and in the international light of popular culture, Jewish and non-Jewish artists could entertain everyone while using subversive strategies on stage to discuss explosive topics such as antisemitism, and even to exchange and question gender roles. In addition, my book concerns how artists in popular culture, in particular, repeatedly had to put up with accusations of obscenity, shallowness, and being a veil for prostitution.

The Influence of Migration on Popular Culture

I argue that a new quality of mobility6 had begun to shape everyday life in the urban centers of Budapest, Vienna, and New York, and that this opened windows of opportunity, especially in popular culture. On the stages of vaudeville, establishments, and variety theaters, as well as through mobility and transnationality, the artists could discuss issues that were usually taboo in other public spaces. They dealt, for instance, with gender-bending, poked fun at nationalists’ agitations, or criticized antisemitism. Nevertheless, or perhaps because of the spaces of possibility that popular culture offered, they also had to deal with many accusations that arose against them and their milieu.

Likewise, I problematize the insinuations that the scene and its protagonists had to put up with time and again and address the seemingly paradoxical ambivalence of urban entertainment venues—between enabling and rebuking, between amusement and social criticism, and between cosmopolitan and colonialist thinking.

The artists in popular entertainment usually traveled as groups from one city to the next or, in agreement with artists’ agencies that advertised through the newspaper network, accepted transatlantic contracts for several months. In the best cases, they even secured commitments for an entire season. Yet, the performers’ mobility pattern displayed similarities to another growing field of migration: sex migration and the increasingly organized trafficking in women. Human traffickers were in contact with their potential victims either in their hometowns or while they traveled alone. The traffickers convinced women to follow them by claiming that they would hire them for honest positions or by proposing to them. Therefore, artists were frequently (mistakenly) accused of human trafficking. According to Kelly Stauter-Halsted, labor migration and sex migration had many features in common: they “occur[red] at roughly the same moment, both engendered risks and abuses, and both were subject to nationalist pressures and imperial restrictions.”7 Narratives of intrigue, seduction, and conspiracy formed around these migration patterns. One such narrative was that women traveling alone relied on selling sex and ended up in groups of young female and male companions forced to serve as sex workers in brothels abroad.8 Such accusations against artists’ agents often illustrate the interrelatedness of discourses on traveling vaudeville performers and the increasingly antisemitic tone of the discourse around “white slavery.”9 It is apparent that the discourse on popular culture did not necessarily adequately reflect the range of Jewish/non-Jewish interactions, and that the historian must reconsider conventional interpretations of reports on supposedly negative instances in light of the political developments of the time.

Simultaneously, the field of popular culture proved particularly open on the content level regarding the discussion of gender relations and identification. In the spaces of popular culture, performers sparked a vivid discussion about gender boundaries by utilizing the metaphor of mobility. Influenced by their own experiences of mobility, they often used the strategy of moving controversial content to places supposedly irrelevant to state actors or critics. For instance, setting a plot in the presumably neutral enclosed space of a train (as censors often prohibited local settings) allowed performers to act out what was not legally forbidden at the time: gender bending. In vaudeville, performers perfected the practice of transgressing genders.

An example of a key gender-bending artist whom I investigate in my book was the Viennese Jewish artist Risa Basté. Basté, born Sali Friedmann, perfected this kind of gender bending with one of her partners, Mr. Man de Wirth, as reported in the Neue Linzer Tagespost at that time: “Mr. Man de Wirth and Ms. Risa Basté still exert the most powerful force to draw attention. They both contrast with each other in an interesting way––Mr. Man de Wirth as a lady and Ms. Basté as a gentleman. Both successfully studied the strengths and weaknesses of the ‘other’ sex and provided imitations that cannot be distinguished from the originals.”10 Having a female and a male performer each playing the opposite sex gave the globally connected sphere of popular entertainment a unique—almost cosmopolitan—air. Within it, one was allowed to address gender bending in public, discuss gender relations, and destabilize sexuality from both male and female perspectives.11

Based on the argument that the emerging mass popular culture around 1900 and the simultaneous mass migration movement influenced each other, and that a special framework of conditions for Jewish/non-Jewish encounters arose in the context of these two developments, I show that a new quality of mobility connected Vienna, Budapest, and New York and shaped their societies. Mobility was reflected in popular culture, was taken up by it, and significantly determined the discourses surrounding it. Mobility offered opportunities to discuss, for example, prejudice, antisemitism, nationalism, or the boundaries of gender, but it also brought accusations and insinuations against those involved in popular culture, such as serving as a cover for secret prostitution. Because of this mutual influence, I maintain, the two phenomena—popular culture and mobility—must be considered together. This allows me to conclude that the performative practices established in variety theaters at the turn of the twentieth century, including the open thematization of sexuality and the practice of gender transgression, not only broke down gender norms but also represented a loosening of general binary constructs and that of a supposed Jewish/non-Jewish dichotomy.

Susanne Korbel is a researcher and lecturer at the Center for Jewish Studies at the University of Graz. She specializes in gender studies, migration, Jewish history and knowledge mediation between Central Europe and the United States. Her current project investigates encounters between Jews and non-Jews in housing sites to develop new, non-exclusive narratives based on everyday life aiming to overcome narratives of particularity. Her first book Auf die Tour! has just been published. 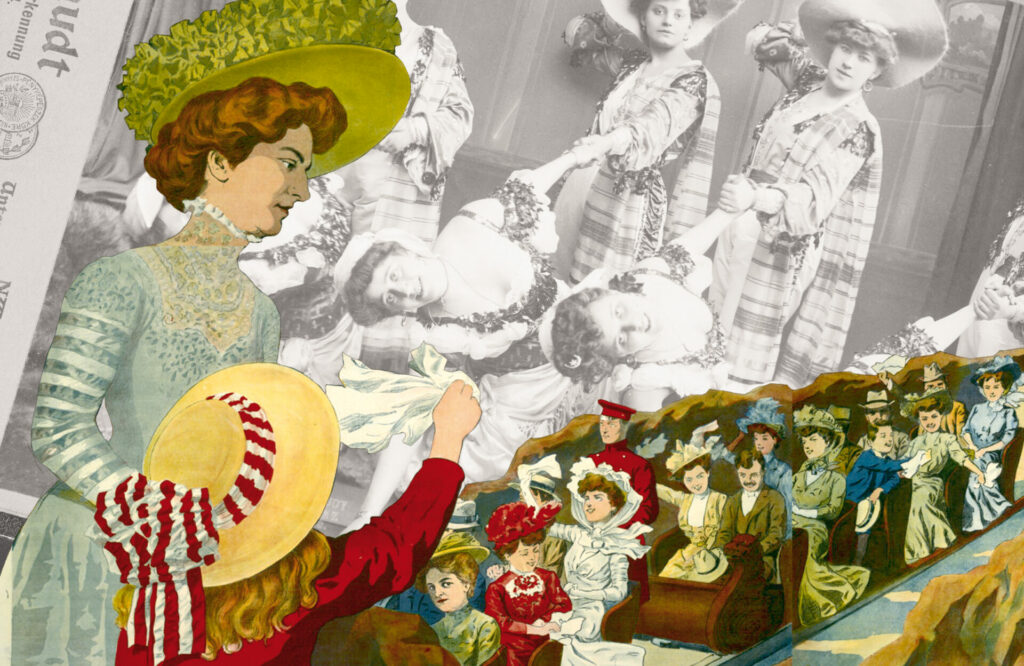 Surveys the research on current efforts to leverage professional knowledge and skills among migrant populations for development in their countries of origin. Pays particular attention to a program called Connecting Diaspora for Development.

Research on Diaspora Knowledge Transfer within a Temporary Return Program

Oct 16, 2019
Charlotte Mueller
In this two-part piece about Jewish refugee photographers, the authors "travel to another historical context to inquire about what migrants and refugees 'knew' and how they choose to communicate their knowledge in their photographic work."

May 14, 2021
Sheer Ganor and Rebekka Grossmann
Introduces a 6-part miniseries analyzing 6 sources of knowledge of the US for prospective migrants in Baden in the late 19th century.

Oct 28, 2022
Martin Bemmann
Thinks about how migrant biographies and autobiographies can be used to understand associated knowledge transfer and translation processes, including their "success" or "failure." Examples are from Australia after World War Two.