For a long time, talking about the German Democratic Republic (GDR) meant talking about the Ministry of State Security (Ministerium für Staatssicherheit), the Stasi. In the first years after the fall of the Berlin Wall and the unification of the two German states, especially, public discourse focused on tracking down unofficial informants (Inoffizielle Mitarbeiter, IM), and on showing how much the GDR’s secret service had infiltrated and permeated East German society. Nearly every village, factory, and family seemed to have a Stasi spy in its midst. Although the secret service, which claimed to protect socialism from both domestic and foreign enemies, strove to observe events and developments in all parts of East German society, the Stasi surveillance was far from total.1

What is even more important is that the Stasi agents collected knowledge on people and their private lives and on any potential threats they became aware of. Consequently, they knew that violence against migrants was escalating in the 1980s. The huge number of case files left behind gives historians insight into how the Stasi saw East German society and how its agents collected and sampled knowledge. When the Stasi then passed this knowledge on, it also affected political decisions. I argue that, although the Stasi had knowledge of the escalating violence against migrants, this knowledge had no impact on state policy. No one within the party reflected on the effects of migration into the GDR, nor did anyone perceive the GDR as a migrant society. Instead, the epistemic impact of violence was that perpetrators and investigating authorities together mobilized and stabilized racist knowledge in East Germany. I understand racist knowledge not as true propositions about humans but as the circulation of rumors and stereotypes about people from other countries affecting institutional reactions to anything labeled as foreign that, thus, structures the overall perception of migrants among the general population.2

Migration to the GDR

From the 1970s on, people from the Global South came to many places in the GDR. These migrants came to the GDR from Algeria, Vietnam, Mozambique, and Cuba, for example, to study, to search for political asylum, or to work. Various governments of socialist states had sent them to the GDR to augment the labor force, as well as to exchange knowledge and strengthen their socialist consciousness, through respective bilateral agreements about the conditions of their stay.

Ninety-three thousand came as contract workers. These contracts officially stipulated that they were coming to be trained by experienced workers and to compensate for the domestic labor shortage. However, the socialist government did not treat them as immigrants or potential citizens for a long time; there were no efforts to integrate these temporary migrants or have them participate in society. Instead, the state party implemented rigid rules: “contract workers” were supposed to be primarily at the factory and had to live in isolated residential homes, strictly separated from other “East Germans.” Relationships with Germans were stigmatized; their stay in the GDR was to end after four years and ended even earlier if they did not stick to this tight set of norms. For example, women who became pregnant were sent home immediately. Furthermore, the Stasi regarded many of these workers with suspicion, and East Germans often alienated or marginalized them.3 This migration regime reveals the racist knowledge that structured official GDR policy—knowledge that can be traced back to a historical pattern of reacting to immigration in the German Empire before World War I. Accordingly, the GDR also qualified as a “reluctant migrant society.”4

Cases of Violence and Everyday Racism

From the beginning, this labor program and its framework generated problems in the socialist society: more and more East Germans blamed these contract workers for various societal ills and even attacked them physically. The Stasi staff recognized and observed such events of violence, filling the files with reports of “invective loops.” One such incident took place on May 1, 1985, European Labor Day, when all the workers of the “VEB Reifenwerk” (a state-owned tire factory) in Riesa gathered in the “Volkshaus Sachsenhof” for an official company ceremony. Seven Cuban contract workers were present for it as well as at the dancing and drinking event afterward. During this party, according to the file on the incident, a “GDR citizen” started an argument with a “foreign citizen” that escalated immediately: the seven Cubans had to defend themselves against seventy Germans, guests as well as staff, and then fled outside the building. As the police were already on hand, they were ready to arrest those who had participated in the fighting. Yet, they arrested only the Cubans and none of the seventy Germans as they could only imagine the “foreign” men causing the trouble. When the Cuban workers tried to explain what had happened, they were attacked again, this time by the police officers. In the aftermath, the Cuban ambassador complained officially to the East German government—and the local police officers and a party secretary had to apologize.5 Even so, there was no further reflection on the epistemic basis of the incident, such as the conviction that the men from Cuba and not the German workers had to be the cause of trouble, in either the apology or the report in the Stasi case files.

Another example of violence that drew the Stasi’s attention occurred in Niesky, a small town near the Polish border, in 1987. In the “VEB Waggonbau” (a state-owned automotive construction company), a group of young, right-wing extremists had begun to clash with a group of contract workers from Mozambique, and the situation escalated and spread throughout the town. When the young Mozambicans visited pubs or dances in Niesky, they found themselves confronted with racial insults and violence and had to defend themselves by the same means. For example, on September 9, 1987, five Mozambicans tried to attend a party in a garden arbor, but the doormen barred their entry. From the inside, neo-Nazis hurled invective at the five, roiling the masses until over one hundred party guests had encircled the small group, insulting and hitting them. Eventually they escaped, with some of them more injured than others, and returned to their residential home. There, they mobilized their fellow residents and set out through Niesky to beat their tormentors with steel chains and knives.

In this case, officials, seeing the contract workers’ presence as the main cause of violence, ordered them to move to another GDR town. To be sure, the Stasi did make a note of the neo-Nazis because they were explicit opponents of the system, but there were ideological barriers to treating such actors or cases as racism. Whether local or regional politicians or the Stasi sought to investigate these perpetrators, they could not acknowledge neo-Nazism in itself as existing within the antifascist GDR since all traditions of fascism were considered to have been erased. Therefore, the racist offenders had to be construed as young men whose consciousness was “false,” negatively influenced by the capitalist enemy in the West and its propaganda. As a result, the group came under constant observation, faced conflicts with their employers, and some went to prison for months.6

This case highlights the dual impact that Stasi spies’ and SED politicians’ epistemes about “foreigners” and “contract workers” had: first of all, as in the previous example, representatives of the state extended their marginalization as they sent them to another town. Secondly, policemen, party members, and Stasi agents were unable to see the deep-rooted racism in East German society and the effects of racist knowledge and practices. Instead, they reproduced this knowledge by penalizing the victims of violence and observing contract workers as potential troublemakers.7

The Knowledge of Racist Violence and Its Impact on Politics

These two examples were paradigmatic of many cases of violence against migrants: the state treated the contract workers as complicit in the violence so that either the police arrested them or local and regional officials sent them to other places to end the conflicts. It was, in fact, common to punish the migrants for racist violence against them by dislocating them, and this practice would continue even after the fall of the Iron Curtain and the end of the GDR.8

Nevertheless, what Stasi records do not tell us is striking. Even though Stasi agents reported every case of violence they uncovered, they did not gain knowledge from these reports. Instead, they failed to reflect on the connection between racism and violence in the GDR because they shared racist prejudices themselves—on the whole, they did not connect violence and migration or analyze the background of the victims; rather, the informants standardized the migrant victims as “citizens” of the People’s Republic of Cuba, Mozambique, or Vietnam. Nor did informants examine the places of violence or look for specific patterns: they failed to notice that migrants who became visible and visited public places were confronted with public shaming or physical attacks, and the Stasi agents failed to observe this massive spread of racist practices in the population. The large number of incidents prove that it was not only individuals who acted this way but also large groups of East Germans. The officials failed to acquire this knowledge and connect the violence to the living conditions of the contract workers. The files remain silent on the hard realities of migrants in the GDR—mainly because the Stasi and the entire political class did not consider them immigrants but merely as temporary “guests.” Moreover, although these migrants came from socialist countries, the Stasi kept them under surveillance and treated them like potential enemies.9 Instead of thinking about nationalist traditions, fascist heritage, and changing realities in the GDR, leading officials failed to adjust their worldview in the face of the fact of violence against contract workers. The migrants were initially eager to accept the conditions of working in the GDR, yet the gap between their payment, employment prospects, and living conditions compared to those of East Germans persisted until the end of the GDR. Furthermore, the SED treated the contract workers as part of the problem, disturbing, surveilling, and marginalizing them. Despite the GDR’s commitment to international solidarity and socialist theory, the policy was national at its core and therefore blind to the knowledge about the realities of social change—and to the GDR as a migrant society. 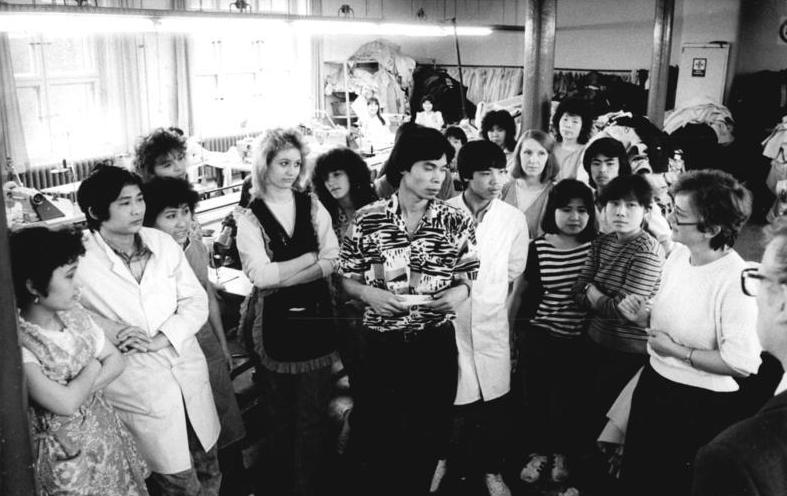 Revisits Werner Schiffauer's 1991 classic, Die Migranten aus Subay, which reminds us that "migrants have lives of their own before they arrive in host societies, and they never cease to maintain ties … to the homelands they leave behind."

Oct 23, 2019
Michelle Lynn Kahn
Using oral history, the author explores how a Polish Jewish family "used knowledge as a strategy not merely to survive but to build a new life" in what turned out to be a highly contingent transit process.

Mar 29, 2021
Anna Cichopek-Gajraj
The author argues that history must be reconceptualized to include migrants not as extras in a society's history but as constitutive of that society. Her example comes from contemporary Swiss history.

Telling History from a Migration Perspective is Not an Add-On

Mar 15, 2019
Francesca Falk
Finding suitable teaching materials to prepare Jewish children and youth for their new lives in Palestine after having survived the Holocaust presented a unique set of challenges.