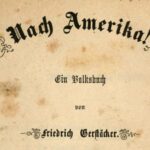 What did emigrants to the United States know about their destination? Where did they acquire knowledge about this country they did not as yet know? One place that comes to mind immediately is one almost everyone had to attend: school. Young students from the region of Baden learned about the world and other cultures through the lessons and the textbooks of their schools. To this day, such textbooks leave a mark on the education and knowledge system of the youth. As Eckhardt Fuchs, director of the Georg Eckert Institute for International Textbook Research in Germany puts it, “Through textbooks, states and public organizations define … what kind of knowledge … should be passed on.”1 Textbooks can be “examined as canonized archives of knowledge,”2 which makes them ideal sources for researching what younger, potential migrants from Baden to the United States were taught about immigration, their new home, and the journey there. In the German Empire, girls and boys attended elementary school together, and the high literacy rate suggests that schools were well attended. 3

Textbooks for schools in Baden during the late nineteenth century offered extensive information on the geography, population, and life in the United States to a broad readership of young Badeners. Yet, as the textbooks presented here will show, the insight they provided cannot be considered objective. Their descriptions can be interpreted as reactions to growing numbers of migrants to the United States. The books caution young readers against migrating or idealizing the United States, perhaps mirroring unfulfilled expectations of a better life abroad. Even so, a survey of their contents suggests that high school students had access to detailed information about the United States without having to resort to libraries, guidebooks, letters, or having to rely fully on word-of-mouth reports.

School curricula provide further information about the depth and potential knowledge students had of the United States, not least because they point to the textbooks used. The curriculum of Baden used from 1869 to 1880 (Lehrplan für die Badischen Volksschulen)4 explicitly referred to the Lesebuch für Volksschulen5 (roughly translated as “reading book for elementary schools in Baden”), one of the primary sources for this post. According to this curriculum, all continents were supposed to be discussed in class, and the United States of America was supposed to be treated in more depth in year eight. Besides the Lesebuch, this post uses a textbook titled Lebensbilder aus der Länder- und Völkerkunde für Haus und Schule6 (roughly translated as “Geographical and Ethnographical Images for School and Home Use”) as a second primary source. Published in Baden in 1894, this textbook was thought to have been written by Arthur Kleinschmidt, a historian and presumably also a geography teacher. Lebensbilder is far more detailed than the Lesebuch, which only contains a poem about Native Americans and a description of New York. Dedicating more than 120 pages to North America, Lebensbilder brings the continent closer to its readers by illustrating the its history, geography, and population.

Both textbooks offered detailed descriptions of New York’s streets and harbor, often flooded with arriving immigrants. Future emigrants must have been particularly intrigued by these portrayals of New York’s infrastructure because many ships from Europe dropped anchor in New York as their final destination. The texts presented a glimpse into the life and happenings of New York City, depicting the city, its architecture, and people in vivid language and images. Both textbooks characterized New York as a modern metropolis with many threats for newcomers, such as pickpockets, tricksters, racketeers, and “countless crooks of all nations” just waiting to take advantage of unknowing immigrants. Lebensbilder advised its readership of schoolchildren not to emigrate to America by quoting an admonitory poem by Nikolaus Lenau. The warning against emigrating continued and directly addressed young readers with the informal second-person pronoun “Du” (you), which increased its sense of urgency.

These depictions of America and emigration as risky do not represent an isolated or particular case in nineteenth-century German literature. These warnings presumably constituted a reaction to an unrealistic image of America that persisted in the 1880s – namely, that is was a heavenly country “where milk and honey flows.”7 The admonishing character of both textbooks continued in the description of the people of America. Both caution their readers against idealizing America and its population.

Both the Lesebuch and the Lebensbilder thematized Native Americans and white settlers’ interaction with them but in starkly different ways. The Lesebuch‘s chapter on the United States opens with a poem titled “Indians” by Nikolaus Lenau, who emigrated to the United States in 1832 in hopes of a freer life but returned, disillusioned, just one year later. The poem represented the nineteenth-century German Empire’s broad public interest in and fascination with Native Americans and especially their mistreatment by American settlers. In the poem, although Lenau romantically extols the natural beauty of America’s Niagara Falls, he focuses on condemning white settlers’ expulsion of indigenous peoples. Lebensbilder, by contrast, exoticized Native Americans as war-hungry “savages” who were dangerous for white settlers. The two descriptions represented contrasting conceptions of Native Americans as primitive barbarians, on the one hand, and the romantic stereotype of “noble savages ” – that is, people unspoiled by civilization and its perils – on the other. Despite this difference, both textbooks illustrate how white settlers and European authors and audiences in general othered Native Americans, reinforcing and spreading stereotypes about them, even to children reading about America in school.

As mentioned above, Lebensbilder went into much more depth about North America than the Lesebuch did, so it also characterized various populations of the United States. It referred, for example, to the settlers of the American wilderness, calling them “hillbillies” and their wives “beautiful children of nature,” only protected from nature's harsh conditions by “a cloth of white linen.” Similar to nineteenth-century travel literature, the Lebensbilder depicted Yankee women and girls as precocious and sexually premature and both young women and men as lousy role models.

Overall, these two textbooks tell a cautionary tale of disappointed expectations and contain warnings against idealizing the United States. Furthermore, they also provide insight into a foreign culture and, in the case of Lebensbilder, a detailed description of US landscapes and geography.

Marie Nella Hoffmann is a student at the University of Freiburg. She is interested in (intersectional) women’s history and American studies.
Suggested citation: Marie Nella Hoffmann, "A Cautionary Tale: Baden’s Late Nineteenth-Century Textbooks and Their Portrayal of America," Migrant Knowledge, November 7, 2022, https://migrantknowledge.org/2022/11/07/baden-textbooks-portrayal-of-america/. 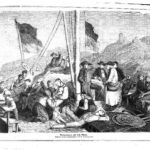 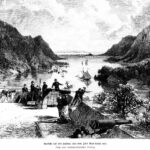 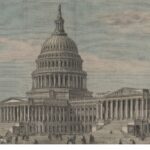 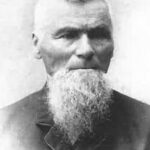 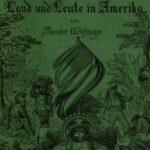 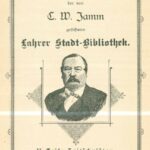 "Reconstituting the networks of the complex and mobile individuals through which indenture globally spread as a legal form of labor can sharpen our understanding of how migration practices and policies became universalized over the course of the nineteenth century..."

Jun 17, 2019
Nicholas B. Miller
Using oral history, the author explores how a Polish Jewish family "used knowledge as a strategy not merely to survive but to build a new life" in what turned out to be a highly contingent transit process.

Mar 29, 2021
Anna Cichopek-Gajraj
Glenn Penny highlights aspects of children's go-between role in Chile not visible in histories of European migration to the United States. German schools in Chile and teachers posted there from Germany are central to this multigenerational story.

Aug 7, 2020
H. Glenn Penny
A researcher from Scotland, by way of Germany, examines a key text offered to international scholars at UC Berkeley during their initial orientation session there.